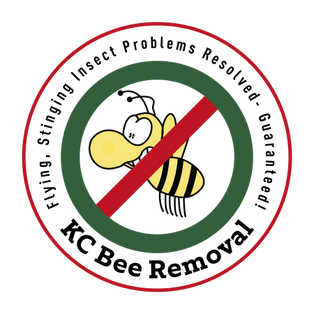 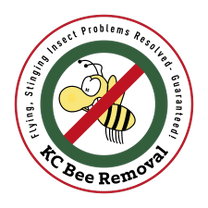 We use safe and efficient methods control Yellowjackets, Carpenter Bees, Wasps, Hornets and other pests when requested. We work in the entire KC Metro Area including Olathe, Overland Park and Kansas City, MO.

Structural honey bee colonies are removed live, along with their comb.  We follow their movements and seal the cavity surrounding their hive. Honey has been known to ooze through walls or ceilings when honey and comb overheat without bees regulating temperatures within the space. Scout bees are attracted to the location because they smell previously inhabited comb. All entrances must be effectively sealed or bees often re-settle in the same space.  A foul decomposition odor may emanate from the location into adjoining occupied areas.  Honey and wax remains to attract moths, beetles, ants, mice and other pests like raccoons and skunks. An empty, open, exterminated colony with honeycomb attracts honeybee scavengers-- thousands of honeybees will possibly visit. Poisoned honeycomb that is not removed will be carried back by other honeybee scavengers to their own hives. Beekeeper managed hives with honey destined for consumption by humans could be indirectly poisoned. Honeybee hives used for pollination could be unintentionally killed.

We observed a honeybee colony after a homeowner had sprayed 8 cans of raid into their entrance. Bees often have stored much honey and created much honeycomb. Spraying into their colony reaches only the first comb in their hive and then is blocked and rendered ineffective. Poisonous extermination chemicals are easily transmitted to neighboring bee hives. Therefore, as a Beekeeper I do not kill honeybees. I hope you don't either.

Tree Colonies are best left alone. When a hive is below 17 feet, it can be trapped out if the bees are a nuisance. We do not trapout colonies above 17 feet as they are completely safe. In fact, they are good for the environment.

Swarms that are normally quiet friendly can turn on you and sting you if you try to exterminate them. Call us so we can safely move them. We will have a beekeeper put them to work pollinating!  It's cheaper in the long run.

Got too many bees around your house?  Bees like both flowers and pollen that can be found on trees or bushes.  Spaying a poison around your house will not will not repel bees.  Go non-toxic and be effective in your efforts:  Apply Fischer's Bee-Quick® with a garden sprayer.  Reapply each time it has been washed off.  It has a nice fragrance of essential oils.

Got bees on your hummingbird feeders?  Take them down and leave them down until the bees have flowers to forage upon again (most frequently after a drought is over).  Buy a bee proof feeder!  Put a section of pantihose around you current feeder to keep those bees from reaching the sweetness.

The following are options for dealing with bees in trash cans or dumpsters: